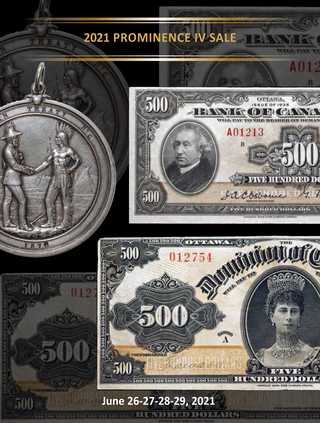 What an honor it is to offer these fantastic collections which will be referenced forever in the Canadian Numismatic history. There are several highlights and spectacular items in this Prominence auction sale IV. Featuring in this sale are several historical gold and silver medals, an Indian Treaty No. 6 Silver Medal dated 1876, some rare and high grade gold coins. The King and the Prince of Canadian coins; 1921 50 cents and 5 cents. The finest example known of the 1947 Pointed Dot Silver dollar graded by ICCS Gem Mint State-65. The Holy Grail of Dominion of Canada banknotes; a 1911 $500 note, the most sought after Bank of Canada banknote; a 1935 $500 note. A new discovery and UNIQUE 1866 $4 from The Union Bank of Lower Canada, the best and finest example 1929 $100 from The Bank of Nova Scotia, an unsurpassable Nova Scotia 1908 $5 graded Superb Gem Uncirculated-66PPQ. Etc. Etc. Etc.